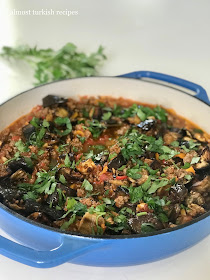 The moussaka, originally an Arabic dish, has been prepared and served in differing ways across the Middle East for centuries. However, it's the Greek version, modernized and de-Turkified in early 20th century, that is well known in America and, unfortunately, the only version one can find at restaurants. I say "unfortunately," because the Greek twist i.e., the Béchamel sauce on top, makes this already deliciously heavy dish way heavier than most of us can handle.

The classic Turkish moussaka consists of fried slices of eggplants, ground beef, tomatoes flavored with onion, garlic, sweet green peppers, tomato paste, and olive oil. However, there are many variations in the Turkish version as well: some use the more traditional lamb and some use chicken, an act I believe should be banned. Some add potatoes to eggplants (another bannable variation) and some use zucchini instead of eggplants.  What follows is, of course, an "almost" traditional Turkish recipe. What makes it almost is the kind of eggplant available in US and how we will prepare it.

The eggplant variety in Turkey that is used for this dish is similar to Italian or Holland eggplants, smaller and longer than the American or globe eggplants. The eggplants are peeled in stripes and cut in half an inch thick slices before deep fried for the classical version. The American eggplant makes giants slices, three or four of which would cover a whole dish. For this reason we will cube them instead of rounds. Fried eggplant is absolutely "the" best; however, it also is very heavy and greasy. Lately the dish is prepared by baking rather than frying. So these changes in preparation makes it an almost Turkish dish.

This is not a difficult dish to make; it's very forgiving. Yet, it's a time consuming one. However, it's so  very much worth the time and effort. I've been making moussaka for dinner parties and potlucks for years, and I've never ever had any leftovers. 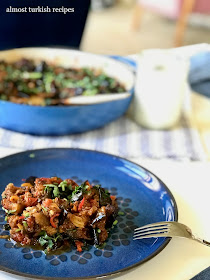 
-Preheat the oven to 430-450 F.
-Put cubed eggplants in a bowl. Add salt and 1/4 or 1/3 cup olive oil. I love my olive oil and I use 1/3 or even more. Toss and mix well to make sure the cubes are covered in olive oil. Next, spread them over an oven tray layered with parchment paper or not. Bake until brown approximately for 20-25 minutes. Try to resist the urge to open the oven and check on them.
-Heat 1/4 cup olive oil on medium in a big pan or heavy bottom pot. Add ground beef and cook thoroughly until it releases its juice and soaks it back. While cooking crush the ground beef with the back of your spoon, wooden spoons work best for this. The ground meat should not be clumped at all.
-Add onion and peppers and cook on medium until soft but not browned.
-Add tomato paste and cook for 2 minutes stirring.
-Add crushed tomatoes, garlic, salt and pepper.
-When the tomatoes are cooked, i.e., they changed into a darker red, add one cup of boiling water.
-Simmer for five minutes.
[We will finish the dish by baking so we need an oven proof dish.]
-If you are using a heavy bottom pot (I use a 3.6 qt casserole dish) for the sauce, you can just add baked eggplant cubes into it and mix.
If you used a regular pan. Find an oven proof dish, place eggplants at the bottom and spread the sauce on top evenly. You can also place sliced tomatoes on top for a nice presentation.
-Bake for 15-20 minutes at 350-360 F.
-Sprinkle parsley on top and serve hot with rice and yogurt.

Tips: You can skip the oven part and just simmer for 10-15 minutes after you put together the eggplant and the sauce. But baking adds an incredible flavor to moussaka.

You can prepare the dish or the eggplants and finish it the next day.

If you want to make it traditional, fry the eggplant cubes until brown.